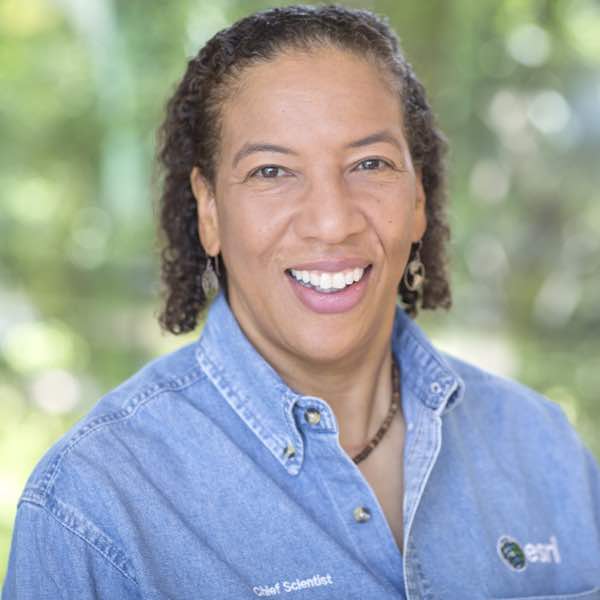 After 17 years as a professor of geography and oceanography at Oregon State University, Dr. Dawn Wright was appointed Chief Scientist of Esri in 2011, and reports directly to Jack Dangermond on strengthening the scientific foundation for Esri software and services, while also representing Esri to the international scientific community. She maintains an affiliated faculty appointment within the College of Earth, Ocean, and Atmospheric Sciences at Oregon State.

Dawn has authored or co-authored over 180 articles and 13 books on geographic information science, as well as deep ocean mapping and conservation. She has participated in over 20 oceanographic research expeditions throughout the Pacific, Atlantic, Indian, and Southern Oceans. In 1991 she became the first Black female to dive to the ocean floor in the deep submersible Alvin. On July 12, 2022 she became the first Black person of any gender to dive to Challenger Deep, the deepest point on Earth, and to successfully operate a sidescan sonar at that full-ocean depth. This was accomplished in the deep submersible Limiting Factor in collaboration with Victor Vescovo and his Caladan Oceanic team.

In April 2021 Dawn was elected to both the National Academy of Sciences and the American Academy of Arts & Sciences. She has served on many advisory boards including the NOAA and EPA Science Advisory Boards, and the Science Advisory Boards of Conservation International, COMPASS Science Communication, and the Ocean Discovery XPRIZE. Dawn holds an Individual Interdisciplinary Ph.D. in Physical Geography and Marine Geology from UC-Santa Barbara, an M.S. in Oceanography from Texas A&M, and a B.S. cum laude in Geology from Wheaton College (Illinois). She enjoys road cycling, 18th-century pirates, her golden retriever Riley, and SpongeBob Squarepants. Follow her on Twitter @deepseadawn.